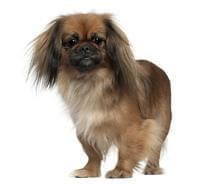 When the British entered Peking for the first time, they found the Empress Tzu'Hai, dead on the floor of her palace, in the Forbidden City, and with five Pekingese dogs guarding her body. The Empress had committed suicide because China was being invaded by troops from the West. Some of her servants and eunuchs had also killed themselves, while others had fled to the hills, taking with them the sacred little Pekingese dogs that had never been seen before outside the walls of the Forbidden City. During the centuries in which the eunuchs had bred the Pekingese for the Emperors, the breed remained cloistered in the Forbidden City at the Summer Palace. The penalty for anyone found with a dog outside these places was death. 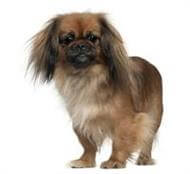 Average lifespan
The Pekingese can live to about 10 - 15 years of age.

Breed personality, characteristics & temperament
The Pekingese is fearless to the point of exasperation as they do not recognise size when they look at another dog or even man. Their loyalty is one of their strongest qualities and they would protect anything they thought belonged to them.

Compatibility with other pets
The Pekingese is a breed that can adapt to any breed. As Pekingese are a fearless breed and can stand their ground with any other breed of dogs if they are introduced at a young age growing up together.

Care requirements
The Pekingese requires weekly care because of its heavy and profuse coat. The coat needs regular brushing and cleaning. The eyes, ears and genital parts in the males must be cleaned weekly. The toenails of the Pekingese need to be kept short at all times. Pekingese are not suited to outdoors. They are a toy dog and adore the comfort and warmth of indoor living. They do need regular walks on a lead on hard surfaces but not too far.

Please take note
The Pekingese is not a lap dog, although they like to be cuddled at times and made a fuss of. They love people of all ages and can be a companion for a lifetime. They have very outgoing natures. They love fun and games and from puppy they should be introduced to toys. Even when they are grown up they love to play with toys and balls on the lawn.

Ideal owners
Pekingese love all types of people of all ages