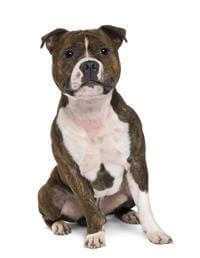 The Staffordshire Bull Terrier was brought into existence in the early 1800s and is a cross between the bulldog of the day and the old English Terrier – a breed which is now extinct. It was produced with the sole purpose of obtaining a dog with a longer, broader head than the bulldog and also able to combine strength and agility. The early dogs did not have very specific Pedigree’s because the importance was a game-fighting dog. The miners and ironworkers of Staffordshire began to foster the breed and the qualities of gameness, intelligence and loyalty were developed. 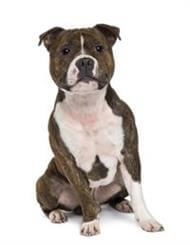 Average lifespan
This dog can live up to 14 years of age.

Breed personality, characteristics & temperament
You must never forget the Staffordshire Bull Terriers’ past as a fighting dog is still present in most Staffords today. Their boisterous nature and spirit give credit to the statement that ‘Staffords are the loveable rogues of the dog world’. Always be a responsible Stafford owner and never have your dog off lead in a public place.

Compatibility with other pets
Staffordshire Bull Terriers live happily with other pets provided that they are trained and socialised from an early age. Puppies can be easily trained to obey house rules and obedience training can be an excellent avenue to provide socialisation with other animals.

Obedience is a fun way to develop a close bond of friendship and respect with your Stafford. They love to be with you and take great delight in pleasing you.

Care requirements
The Stafford is a low maintenance breed, the short coat requiring little more than a regular brushing and the occasional bath. Depending on the amount of exercise your dog has on a hard surface will determine if the nails need clipping to keep them short and tidy.

Ideal owners
Staffordshire Bull Terriers are a dog that very much needs to be a member of the family. They are not a dog that can be left alone in the back yard to amuse themselves.