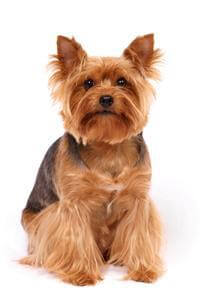 The Yorkshire Terrier is the result of cross breeding between a variety of terrier types and first appeared around England’s Yorkshire region during the middle of the 19th century. The early Yorkshire Terriers could be as large as 6kg and were used, similar to other terrier breeds, to kill rats. Over time, breeders produced a smaller, more beautiful dog that was a household pet and show dog, rather than a rat killer. 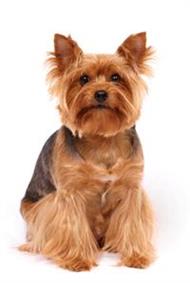 Average lifespan
Yorkshire Terriers often live for 14 years, but can live up to 16 years of age when cared for properly and given the right food.

Average size and weight
The males normally grow to 6kg and stand at 20cm tall and the females are 3kg and 18cm in height.

Breed personality, characteristics & temperament
Most Yorkshire Terriers are alert, active and inquisitive. They can be determined, but are faithful and loyal to their human family. They thrive on human companionship and will happily be included in family activities. They make a good watchdog and will bark if strangers come to the home. Although small, they are a robust and healthy animal and have the proportions of a normal dog but in miniature. Yorkshire Terriers have a coat that does not shed or moult and therefore are a hypo-allergenic (low allergy) breed. The coat is not weather resistant and so they should live indoors with periods outside for exercise.

Compatibility with other pets
Yorkshire Terriers generally live happily with other breeds of dog as long as the dog is of similar size.

Care requirements
The Yorkshire Terrier’s coat will generally grow to the ground and needs to be brushed for an hour every second day to keep it free of tangles. The hair on the head needs to be tied up to keep it out of the eyes. If an owner wants less work then the coat can be kept short. They will happily go for a long walk with their owner or run around in the back yard.

Ideal owners
The Yorkshire Terrier is suitable for people of all ages, with or without children, but children do need to be supervised around this small dog. The most important issue when considering owning a Yorkshire Terrier is whether you have adequate time to look after it. Similar to most dogs it is not good for a Yorkshire Terrier’s temperament to be left alone for long periods of time, and if everyone in the house is away for most of the day then it is best to get two dogs so that they have company.